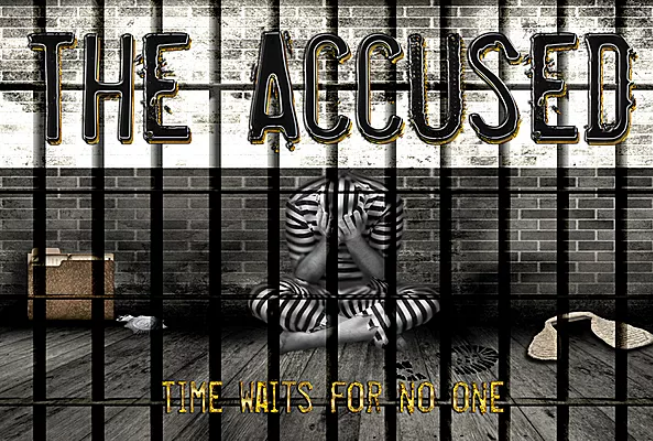 Pressure Point‘s an interesting company, having been open little over a year but already having created five games and retired two of them. Tucked away just off the high street in Ashford, it’s a cosy venue with a professional touch throughout. One detail that I really liked was the use of previous games’ winner-photo signs as decoration. It helped to reinforce that they were an experienced company that knew what they were doing. After a chat with the owners, it was time to see whether they really did…

You are The Accused! Accused of a crime you did not commit. Unfortunately, someone had a target against your name and an unknown source submitted false evidence in your murder trial that pins the blame on you!

However, it appears an opportunity has presented itself…

As soon as you walk into the room, there’s a real sense of space. Often, prison games start in relatively small cells, but here there’s plenty of room to walk around and explore your environment. They’ve filled the space sufficiently for it not to feel empty but, equally, the decoration never felt like red herrings, something that held throughout the game. That sense of space is an unusual choice, but perhaps they like to do things a little differently, because this game isn’t really about a prison escape at all. Instead, it’s about ensuring that justice is done.  Don’t worry – you’ll still get the usual excitement of a jailbreak but with something extra on top.

I’ve not played their earlier games, but I’d guess from what I saw here that this was where they made a transition from padlocks to other mechanisms as puzzle solutions. There were still several padlocks in the room but few enough that they didn’t get in the way. I don’t remember ever wondering which padlock a solution would unlock. With good, logical puzzles in the game, that lack of faffing over inputting codes allowed us to get a real sense of flow during the experience. That’s also helped by the game never feeling too linear – on the odd occasion where we did get stuck or someone was solving a more involved puzzle, there was always something else to work on.

In truth, the puzzles weren’t massively unusual on the whole, but there were a couple that stood out – one because it was something that I’d not encountered before and another because it was a genuine moment of humour in the game. Those aside, you should expect solid puzzles of a variety of difficulty levels – a couple of which really had us thinking hard for a while. Most of those are pretty separate from the plot, with just the briefest of links, but there are a couple which help to reinforce the narrative. If I had to pick a gap, it was a lack of physical puzzles – something I love to see in a game.

As you play, you’ll pick up a little more of the story. It’s not essential to understand what’s going on, but there’s a nice narrative underlying the experience that helps justify the escape. That’s continued into the endgame with a thematically strong finale.  It’s not super-showy, but it makes for an interesting and unusual ending to what is a very fun game.

We escaped the room without any clues a few seconds after the half-hour mark.

This was a very solid prison escape game at its core with a few twists to make it more interesting. A couple of novel puzzles, some humour and a slightly more interesting story led to us coming out on a real high.

We played as a two, and I think that or three players is the right choice for enthusiasts – we didn’t really get stuck anywhere for long, but we also didn’t rush (indeed, on a couple of occasions we solved puzzles independently because we had enough time). It does parallelise for more people, but why risk missing out on some of the fun?