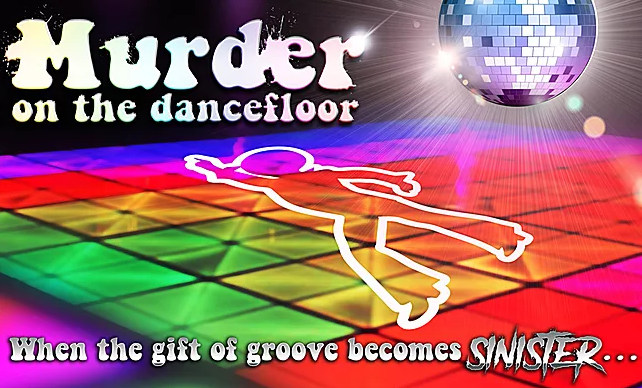 I’d been more than a little impressed by the first Pressure Point game we’d played, so I was curious to see what Murder on the Dancefloor would bring. What could that name would mean from a theme point of view – clearly some sort of pop background, but would it be a token effort or would they go all in?

Before that, though, we got a chance to chat to the owners, who were clearly enthusiasts and happy to chat about all the games across the region. It’s great to know that, when local players are becoming enthusiasts (and it seems likely that they will, given the games here), there’s someone knowledgeable pointing them in the right direction!

It’s 1978, the ‘Gift of Groove’ disco dance competition has ended and the King of Groove has been crowned. Whilst most rejoice, some seek retribution! As you celebrate and enjoy your night, a quick breath of fresh air is required…

You go to head back in, but police flood the scene. Everyone is evacuated. You hear ‘The King is Dead!’ amongst the rushing rabble. With all your belongings inside, there is no way for you and your friends to get home. You find another way in and you can’t help but have a snoop around. Your curiosity gets the better of you.

What you are about to find inside is not groovy…

With a game set in the 1970s and a pop music theme, I was certain we’d be walking into a garish, colourful, music-filled room, but they threw us off balance right from the start by dropping us into a very different scene from what one might expect. It was beautifully created, though, with a great centrepiece and a clue delivery system that fitted the theme perfectly and provided a first glimpse that this game was going to be creative and funny.

That opening scene was pretty good but, to be honest, the standard of decoration only goes up as the game progresses. It’s not a huge space, but it’s well used, and the reveals during the experience are impressive. As you travel through the game, you’ll be picking up information about the murder that you need for the finale. As they make clear during the briefing, understanding the story is going to be critical to finishing the experience. That shouldn’t scare you – you’ll pick the information up easily enough – but it highlights that this game is going to be partly story-driven and that you will come out knowing more than you did going in.

I didn’t feel that there were huge numbers of puzzles in this room, but the ones they had felt chunkier than usual. They invariably involved multiple props and, while we may have zoomed through one or two of them, most of them were slightly more involved. Padlocks had pretty much disappeared from their set this time round, with only a couple on display in places that made sense to be locked up. Instead, they’d opted for more physical interaction with the set to solve puzzles – for example, pressing buttons or moving props. There’s a decent range of puzzle types, although there were no significant physical puzzles to get involved with. That’s a shame, because it’s a great way of appealing to people who perhaps find hard-core puzzles less interesting.

Throughout the game, there are moments of humour to carry you along and, while it is a murder mystery at its heart, it’s very much tongue in cheek throughout. The game finishes by bringing the group together to say who the murder victim is in a way that worked for us, but I can imagine some teams finding it weak compared to a traditional escape.

We finished with around fifteen minutes remaining, having taken a single clue on the last puzzle. We were desperately trying to solve it because zero clues is always an enjoyable achievement, but our GM jumped in at just the right moment to point us in the right direction. Rarely have I felt so utterly, utterly stupid at what I’d missed…

This game was an absolute joy to play. An interesting theme, beautifully executed with good, logical puzzles and plenty of humour thrown in. I don’t know what Pressure Point’s magic is, but they make games that just seem to flow really well and where you come out on a high.

As with the Accused, this is a fun experience that’s very doable as a pair, so I’d encourage enthusiasts to head along in that size of team. That said, there’s fun in just being in this space, which I think lends itself well to taking along a larger group and not worrying about the puzzles so much as the fun of the room. In other words… just book it for whatever size team you can get!

Full disclosure: We weren’t charged for these tickets. That doesn’t influence the review – you can read more on the About pages