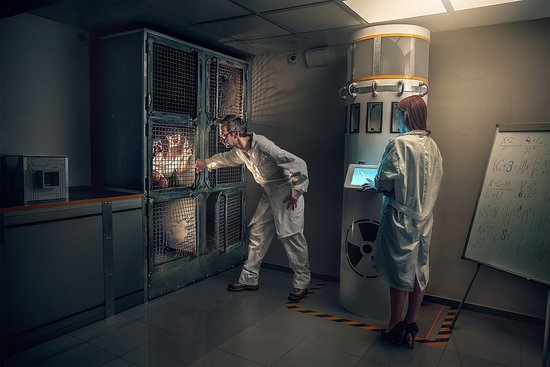 We’d booked back-to-back games at AIM Escape so, as soon as we came out of Psychopath’s Den, we pretty much headed straight into Patient Zero with only the briefest of pauses in the waiting area. It’s a pretty space but, with four games, it would get pretty cramped if all the teams turned up at the same time. Sensibly, they’ve staggered their start times, but it’s worth making sure you turn up at just the right time so you don’t find yourself too crowded.

No external briefing was required, so we were just given a quick reminder of the theme before being shown inside for the full video introduction.

In the near future, governments work on ever more deadly viruses to develop end of days weapons technology that makes the atomic bomb look like child’s play. Deep in an underground bunker a team of scientists have been creating the deadliest virus yet, but communications have suddenly been lost. Sensors detect a biological hazard down below, but the fail safes have been manually shut off meaning the virus could already be escaping. It is up to you to find out what went wrong, contain the virus and save the day. The fate of the world is in your hands – if the virus escapes then humanity is doomed. For science fiction and technology lovers, this escape room is packed with gadgets and drama.

Thankfully, the lighting in this room was far better than in Psychopath’s Den, which was great because, not only did it make solving puzzles easier and more enjoyable, but it also meant that we could appreciate the effort they’d put into the set. A lot of work has clearly gone into creating something that feels futuristic and industrial. In fact, when I think back, it felt spaceship-like in the way it looked.

There was cool stuff to investigate right from the start, and that continued throughout the game. Even as an experienced enthusiast, I found myself drawn to chunky props and interesting elements in the room. At the same time, we didn’t feel overwhelmed by what was on offer – they’d managed to walk the tightrope between keeping teams interested and not scaring them.

There’s a nice balance here between open and linear design, with us encountering small groups of puzzles which allowed our team to feel like we were very much playing together while still not stepping on each other’s toes. As we solved each puzzle in a set, we’d naturally gravitate towards whatever was left for collaborative solving.

The puzzles were fun, varied and logical, making great use of the theme to provide interesting interactions with the room. Where it did fall short, it generally wasn’t the core puzzle that was the problem but the way it was implemented. For example, we hit a couple of minor issues – one with some tech that was temperamental and one with a prop getting physically stuck.

Once again, though, the biggest issue was with lighting and colour. While this was nowhere near as problematic as in the previous game we’d played, we still fell foul of it on a couple of occasions. I’ve talked to a fair number of enthusiasts who’ve played their games, and I’m yet to meet one who hasn’t complained about this aspect of their experiences. I’m hopeful that they’ll take that feedback to heart, because I think there are relatively easy fixes to be had which will significantly improve this game.

The finale was the second weak spot.  The final real puzzle you solve in the room is probably the least exciting by some margin; and then, the way the game plays out, we were left unsure of whether we’d actually finished. They seemed to realise that was an issue, though, and were already working on how to improve it.

Our team of three escaped in around 45 minutes having – I think – taken a single clue.

We enjoyed this game, with its variety of challenges and fantastic set, but I can’t help but feel that it fell short of its potential. There’s scope to make this a fantastic experience with relatively little work – it was only let down by rough edges on some puzzles and a finale that felt flat. Both aspects are very fixable, so I’ll be keeping my ears open to hear what later players have to say.

I’d suggest taking along four players to this game. It’s reasonably tough – especially with the rough edges – but it’s not so roomy that I’d want to take the maximum. Four seems to hit that sweet spot – split into pairs and team-solve your way to the end!