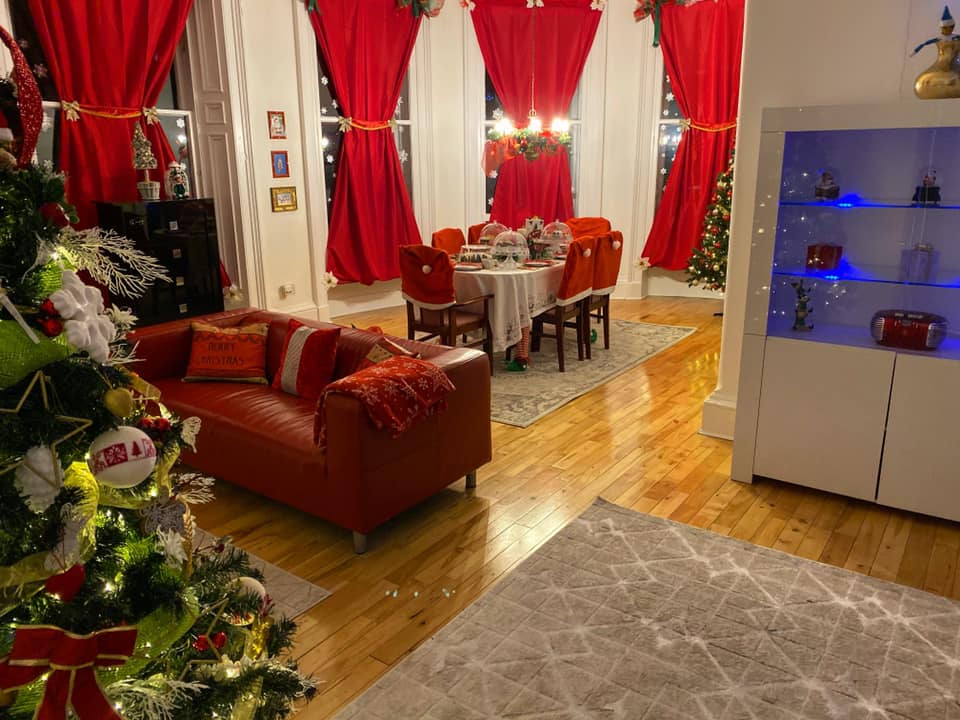 I debated whether or not to review Locked In Glasgow‘s Christmas game given that it will have closed almost as soon as the review comes out, but we had so much fun in it that I still think it’s worth recording the experience. Plus, it may encourage players to head to Glasgow for future Christmases in the confidence that their Christmas game won’t feel like a temporary room.

So yes, let’s get that out of the way now. This game was absolutely gorgeous. Locked in Glasgow recreated a beautiful Christmas theme in an apartment with an attention to detail that was simply ridiculous. They must have spent a small fortune kitting it out, but the result was a room that was a total joy to wander around from the moment we arrived.

The hub of the game will be familiar to players of their School of Magic experience but, in essence, it gave a structure to the puzzles that signposted what we were meant to solve and gave us visual feedback about the progress we were making. Some people may find that a little too directing, but I loved the confidence it gave me in where to head next. It also meant that they could decorate the room beautifully without making me feel like there were a million red herrings. I ignored my urge to search every item in the space (and there were a lot!) and instead followed their lead about what might be important.

That’s not to say there wasn’t some free thinking required: a few of the challenges were pretty clear, and others required us to explore the room in order to build up the information we needed to complete a puzzle. That combination worked well, and I suspect it would be fantastic for kids too – with the variation in difficulty ensuring that even really young children would have something to do.

The structured nature of the game meant there was less of a clear finale than with other experiences, but it also meant that we were ramping up the tension throughout as each puzzle fell and we had one less to complete. There was also a pair of bonus puzzles that ran alongside the rest of the experience. I’m glad we chose to do most of the work as we went along because, while they were fun things to do, I think they might have been slightly anticlimactic for us if we’d tried to complete them at the end. They certainly weren’t bonus puzzles in the sense of “harder challenges for enthusiasts”, but they did ensure that there was a sweet ending to the experience.

Few games have filled me with such unbridled joy as Christmas Dream. The structure of puzzles gives you confidence in searching the room, the bonus elements are a fun addition, and the room is absolutely gorgeous throughout. This may be a pop-up experience lasting just a few weeks, but it felt like a permanent game, and it’s a travesty that they built it for such a short period.

We played as a two, and I think enthusiasts would find that to be the right number, but this would have been a great game to take kids or new players along to, and I’m sure that will be true of the next one too!